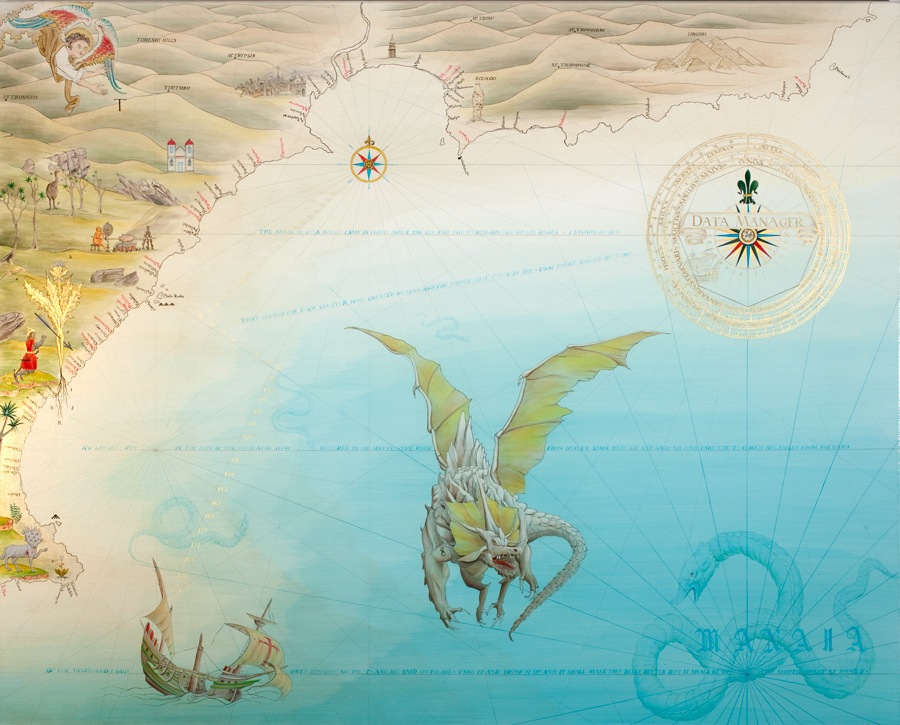 Google noted New Zealand artist Roger Mortimer’s name and you will disappear down a rabbit hole into a tale of medieval manoeuvering. His 14th century ancestor, Roger de Mortimer, was an English nobleman who was strategically married off at 14 to the equally youthful Joan de Geneville. She later had the good fortune to inherit property in the Welsh Marches and Ireland as well as the 11th century Ludlow Castle in Shropshire. With this wealth behind him, Baron Roger started the Despenser War, leading Marcher lords in a revolt against King Edward II. Unfortunately for him, the attempt to overthrow King Edward failed, and Baron Roger found himself chained up in the Tower of London. Helped by his mistress Isabella, King Edward’s queen consort, he managed to escape to France where he rallied troops to invade England and depose Edward, having him murdered at Berkeley Castle. Three years later in 1330, Edward’s eldest son got his revenge, and Roger de Mortimer was taken to Tyburn where he was hung without trial at the age of 43.

This story tangles with elements of the Auckland-based artist Roger Mortimer’s painting: peer into the lustrous surfaces of his early works and alongside the official-looking elaborately lettered documents that look like royal decrees are scenes of internecine warfare, eternal punishment in hell, beheaded figures, and much grief and sorrow over children, marriages and money. Fifteen years ago the roll and bump of the ocean washed into his work as well, marooning populations on bits of coastline, mapping territory familiar to both viewer and artist. Mortimer’s map works could be described as exemplifying “the map–territory relationship”: reminding us that reality should not be confused with its representation. Polish-American scientist and philosopher Alfred Korzybski came up with this label: “The map is not the territory,” he says, “just as the word is not the thing.”

Mortimer migrated his method to more literal mapping around 2007, and these map works form the basis for the second part of this exhibition. He began by importing those aspects of portolan charts which are based on compass directions and estimated distances observed by the pilots at sea, and then overlaying personal and prophetic messages. Cartographic imagery is strewn across the field of vision in these paintings, not in reference to place so much as to people: Mortimer has delved into psychologist Carl Jung’s ideas about universal, archaic patterns and images. Manaia has a dragon flapping over the surfing paradise of the Mahia Peninsula, with the ocean shown as a blithe field of azure. Meaning is imbedded in the maritime, with the sea symbolising the collective unconscious, that part of the human mind that Jungians believe is formed by ancestral memories of experiences. It is a strange coincidence that translating Mortimer from the French leaves you with a combination of the words for ‘death’ and ‘sea’. What seems clear is that as well as being deeply personal charts of his experiences and imagination, Mortimer’s paintings have the potential to resonate widely, offering imagery and ideas with universal significance. Roger Mortimer graduated with a Bachelor of Fine Arts from Elam in the late 1990s and exhibits extensively in solo and group shows. A survey exhibition of his painting will open at the Gus Fisher Gallery in Auckland on Friday 8 July 2017.