An espaliered Chinese quince at his parents’ home in Westmere was the basis for the decoration for a series of “Blossom” vases which Len Castle made in the late 1960s.

These stoneware vessels were the culmination of 20 years of intense dedication to pottery. Having trained as a secondary schoolteacher, Len Castle began teaching himself how to make ceramics in his early twenties, throwing his first pot in 1947. A decade later, he was awarded a fellowship to go to Cornwall in England to work with Bernard Leach. This British potter was the author of A Potter’s Book and he had become a guru for all aspirant ceramicists in New Zealand.

At St Ives, Len Castle met Atsuya, the son of Japanese potter Shoji Hamada, and this connection led him to later study in Japan and then visit potters in Korea and China. His attempt to synthesise these Anglo-Oriental traditions is apparent in this vase made after his return to Titirangi from Asia in 1967.

In 1963, Castle had resigned from the position as a science lecturer at Auckland Teachers’ College, which he had held for five years, in order to become a full-time potter. He had studied zoology, botany, chemistry and geology at The University of Auckland for a Bachelor of Science, completed in 1946, and this scientific background remained central to the development of ideas in his work. His interest in organic growth is evident in his use of natural references for the forms of his pots, and the motifs for their decoration. It was the contrast between the angularity of that quince’s stems and its bracelets of rounded petals, for example, which inspired one of his two brush patterns.

Castle used melted wax to quickly draw the quince blossom within an encircling oval on one side of the biscuit-fired vase. He writes: “My limited skill with a brush, plus a desire for a method that would allow a quick and lively interpretation of quince stems and flowers led me to choose the wax-resist technique”. The sprayed, light-coloured overglaze ran from the resisting wax pattern and settled beneath the brush strokes. Castle experimented with varying thicknesses of glaze until the colouring after firing appeared to him like a hint of hoar frost.

Asymmetrical but balanced, the energetic and spontaneous calligraphic pattern enlivens the symmetry of the vase’s heavy body. The Blossom vase has been described as displaying a “boulder-sized Sumo wrestler silhouette” by poet and critic David Eggleton, and is a unique Len Castle shape.

There are three of these vases in The University of Auckland Art Collection and a total of 12 examples of the work of this master potter which are on permanent display in the Sylvia Ashton Library at the University’s Epsom Campus.##Linda Tyler 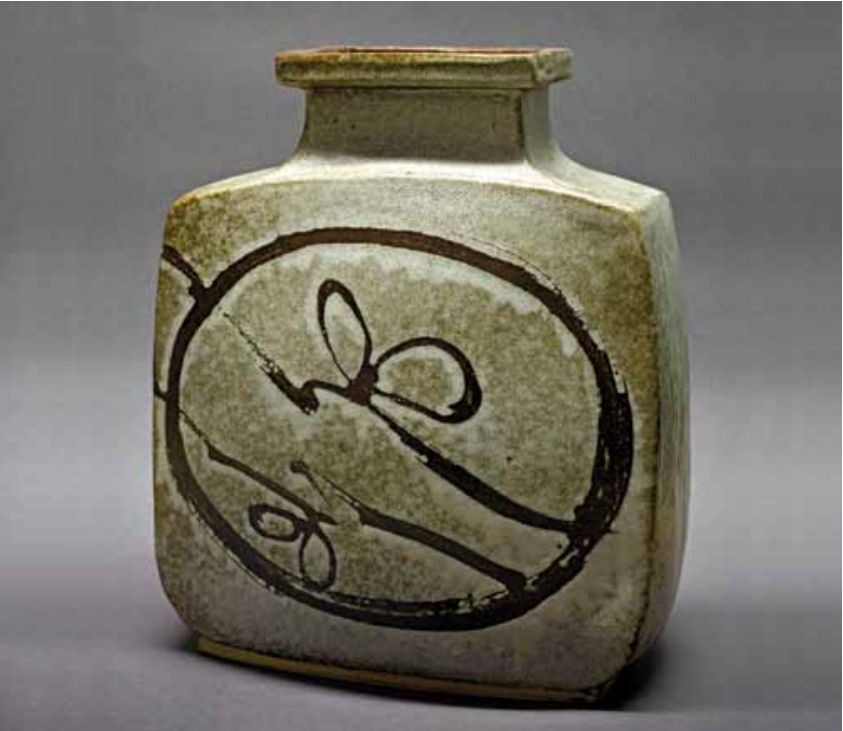