It was in the mid-1960s that Barbara Tuck studied at the University’s Elam School of Fine Arts. And during her time at art school, Tuck developed her skills and stylistic approach to art. Fifty years on, this style combines multiple narratives, aerial perspectives and eye-catching, dreamy colours. Her heady landscapes are magically mystical, glinting at magpie onlookers.

Within canvases such as Terrace Refugia (2017), which is a recent acquisition for the university’s collection – Tuck continues New Zealand artists’ nationalistic concerns with the landscape genre. These concerns date back to the 1930s and 1940s, when modernists such as Colin McCahon (1919-87), Toss Woollaston (1910-98) and Rita Angus (1908-70) were consumed with the idea of developing a new landscape iconography as part of the drive to establish a national painting style. What subsequently materialised were scenes typifying small towns and rural life in Aotearoa.

The reason for this growing regionalism was twofold. Firstly, it emerged from the devastation of World War I and the Great Depression, where artists saw landscape painting as a means of escape. It was also formed as a way to boost national identity: to celebrate New Zealand’s ‘unique’ landscape and the difference it offers from other countries. With these themes in mind, Tuck’s art works continue the longstanding conversation around landscape – but with a distinctly contemporary approach. Her paintings feature stacked narratives, whereby multiple viewpoints are seamlessly intertwined into one picture space.

Terrace Refugia is one of six works that deal with the Rotorua region, 130 years on from the eruption of Mount Tarawera. Refugia is the plural of ‘refugium’, a geological term explaining the phenomenon in which a population of organisms can survive through a period of unfavourable conditions. In other words, Tuck’s imaginative world lives on after disaster has struck.

With this knowledge, scenes of a volcanic explosion start to unfold: smoke swirls, sinter terraces glint, and mud pools ripple. Despite the horror that comes with this type of natural disaster, Tuck’s landscape is ravishing and rather inviting. It celebrates the fluid and beautiful environment and the myths and histories that come with it. Though the work is modest in scale at 750 x 750mm, its scenescape offers tantalising detail. Each look afresh or slight movement around the canvas reveals something new: shimmering tones, a distant figure, or swirling lines. Her mastery of the medium is apparent in these minute aspects. 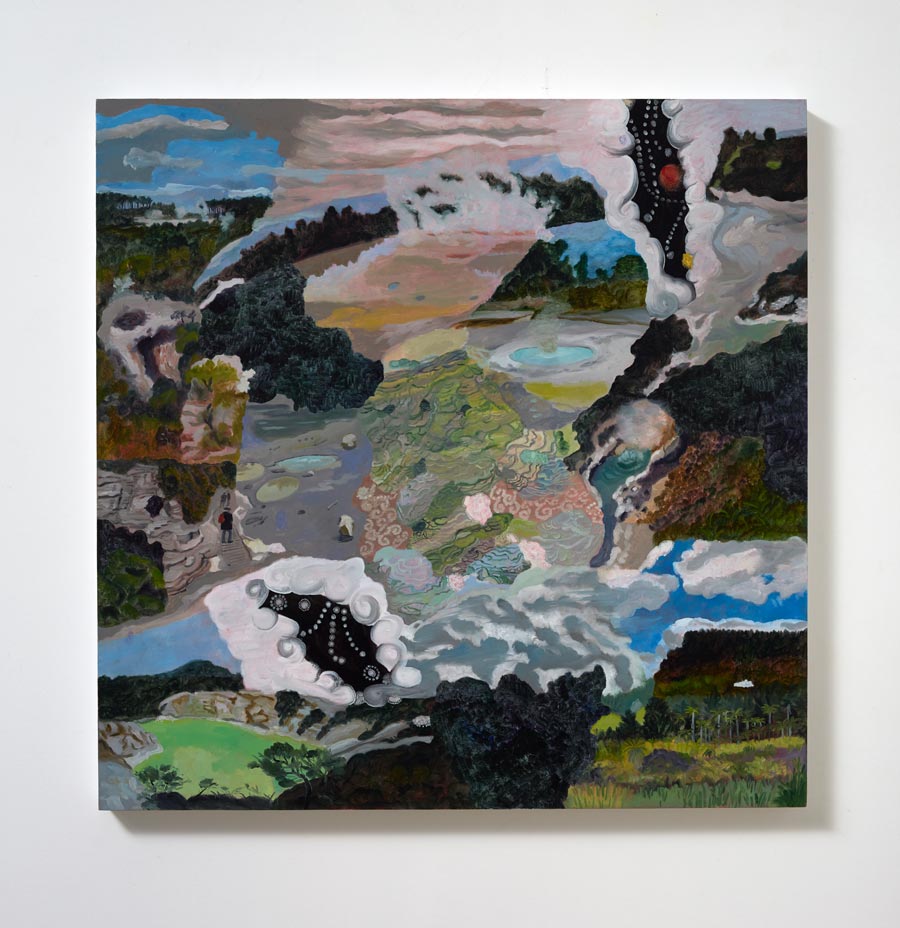